“Effectiveness,” simply stated, is the degree to which something or someone achieves a targeted end result. As coaches, the most common measurements of our effectiveness are  student learning and performance. Thus, change, over time, either in movement quality, outcome consistency or quality, or a combination of some or all of these, provides the evidence that, as coaches, we are effective.

In my experience, coaching effectiveness is largely a function of a variety of abilities, including:

Interestingly, these observations align nicely with the learning loop embedded in K-COACH.

Recently, I came across an article from the Harvard Business Review entitled, “The Curse of Knowledge,” While the article’s purpose is to shed light on the negative effects of complicated business jargon, it references a study that reveals the challenge of effectiveness in general, and communication and understanding, specifically.

“In 1990, a Stanford University graduate student in psychology named Elizabeth Newton illustrated the curse of knowledge by studying a simple game in which she assigned people to one of two roles: “tapper” or “listener.” Each tapper was asked to pick a well-known song, such as ‘‘Happy Birthday,’ and tap out the rhythm on a table. The listener’s job was to guess the song.
Over the course of Newton’s experiment, 120 songs were tapped out. Listeners guessed only three of the songs correctly: a success ratio of 2.5%. But before they guessed, Newton asked the tappers to predict the probability that listeners would guess correctly. They predicted 50%. The tappers got their message across one time in 40, but they thought they would get it across one time in two. Why?

When a tapper taps, it is impossible for her to avoid hearing the tune playing along to her taps. Meanwhile, all the listener can hear is a kind of bizarre Morse code. Yet the tappers were flabbergasted by how hard the listeners had to work to pick up the tune.
The problem is that once we know something—say, the melody of a song—we find it hard to imagine not knowing it. Our knowledge has “cursed” us. We have difficulty sharing it with others, because we can’t readily re-create their state of mind.”

Think about this for a second: In the study, the person communicating predicted that, in effect, the message would be understood 50 percent of the time. In actuality, however, when tested, the message was understood only 2.5 percent of the time. Despite the obvious differences between tapping songs and hitting golf shots, the study demonstrates a classic problem that we all face: As coaches, we have a vast body of knowledge and insight that is coded in very specific language (as well as, for the most part, a clear and accurate understanding of what it is that the student or player needs to do). However, much like the listener in the tapping experiment, the student with whom we are trying to communicate frequently cannot decipher our code. Therein lies the great challenge.

The crux of the challenge in improved coaching frequently isn’t what is being communicated; instead, it’s the link between effectiveness and student understanding, which are based entirely on communication and largely on language. In short, there are more instances than I’d like to admit in which a player comes back after a session, and by no fault of their own, is doing something completely different from what was asked of them. It is often the case that what they heard, or thought they heard, isn’t what was said – or at least not precisely. Or, conversely, what was said isn’t what they heard.

So, the goal becomes: How can we package, or better yet, translate, our knowledge so that it is completely and accurately understood by someone with very limited, inaccurate, or no knowledge of the subject? In short, to be effective in assisting players in acquiring new or refining existing skills, we need to be experts at creating better understanding. Furthermore, what tools can we put into our coaching toolbox to help us be more fully understood? To better facilitate understanding, I use these three tools:

1.Be brief;
2. Create understanding; and
3. Use a translator.

How many items on your to-do list can you actually remember? After seeing a phone number on a piece of paper, how many digits of that number can you write down before you have to look at the number again? Furthermore, how accurate and complete can you recall both the to-do list and the phone number? If you’re like most people, your recall will likely be not only incomplete, but also inaccurate.

While simple, these examples speak to two things:

(1) The scarcity of working memory in the brain; and
(2) Our limited ability to process multiple pieces of information simultaneously.

More importantly (and more relevant to our discussion), these examples also demonstrate how, if a message is complex, it is likely be misinterpreted, misunderstood, or, quite possibly, forgotten altogether. Indeed, the likelihood for the message being misunderstood or forgotten increases with the complexity of the message.

To that end, any coaching intervention, whether it’s the introduction of a new concept or the provision of corrective feedback, needs to focus on the one, or maybe two, most critical variable(s) necessary to unlock performance. In my experience, this can only be done by stripping away all except the essentials.

As the tapping experiment highlights, the simple fact that information has been transmitted does not guarantee that it’s been received. In other words, while it is a necessary condition of understanding, information transmission alone is insufficient. The challenge then is: How can we improve the accuracy of the concept as re-constructed in the mind of the learner? How can we facilitate a clear and complete understanding of what the learner needs to do?

In my experience, communication occurs most effectively when the learner is challenged to be a more active participant in the process. In other words, we should challenge the learner to become a problem-solver, not just a receptacle for answers.

My approach is to leverage the power of questioning. By using a questioning approach, the learning process becomes less about me, the coach, telling the learner about the movement, and more about the learner, through guided trial and error, understanding the movement. The simple act of reflection coupled with the evaluation of the outcome relative to its intent becomes an effective tool behind the power of a few good questions.

“Think like a wise man, but communicate in the language of the people.”
– William Butler Yeats

As discussed earlier, coaches drink from a fountain of knowledge that is written and coded in a very unique, specific language, which, unfortunately, is not understood very well by the people who need to interact with that knowledge – the golfers themselves. However, for the learner to fully comprehend what it is that they are tasked with learning, their understanding of the message is paramount. Thus, the gap that exists between the learner’s understanding of the coach’s message and the language of the coach’s message needs to be addressed. The solution typically occurs through (for lack of a better term) “knowledge translation.”

What is knowledge translation? It’s the act of taking the outward message and rephrasing it, putting it into the language of the receiver. How do we achieve this type of translation in the context of golf? We do so with the help of a tool like K-PLAYER, which enables coaches to take complex messages regarding “to-be-learned” movements to provide a platform for students to code the messaging with their own language and experience.

For example, consider a player working on the orientation of their upper body at the point of impact. As the player experiences the subtle (or not so subtle) differences between their current and their desired patterns, they can start to translate their feelings into words, images, or analogies that are relevant to them. As an aside, it is widely regarded that this type of instruction and feedback are effective as they facilitate the learner’s discovery of the critical sources of intrinsic feedback that are essential to their performance without requiring them to translate complicated verbal instructions (Magill & Anderson, 2004). By working backward from the solution, the movement challenge set forth by the task enables the learner to explore their degrees of freedom to arrive at the solution. From there, the steps taken to achieve the task outcomes, as well as the differences between the familiar and new patterns, becomes written in the player’s own language – not the coach’s, and that language may ultimately reside at a level deeper than language, which at times may require a translator that communicates with cues other than words, such as K-PLAYER. To the player, the new pattern becomes intuitive.

Ultimately, the dual part task of bridging the communication gap that exists between coach and player, and, from there, the “learn it-do-it” gap for the player, is inherently complex. However, by taking a communication-first approach, we can more effectively deal with the language-understanding barrier that exists between coach and player, which, if crossed, ultimately empowers the player to more effectively close the gap between learning and doing. 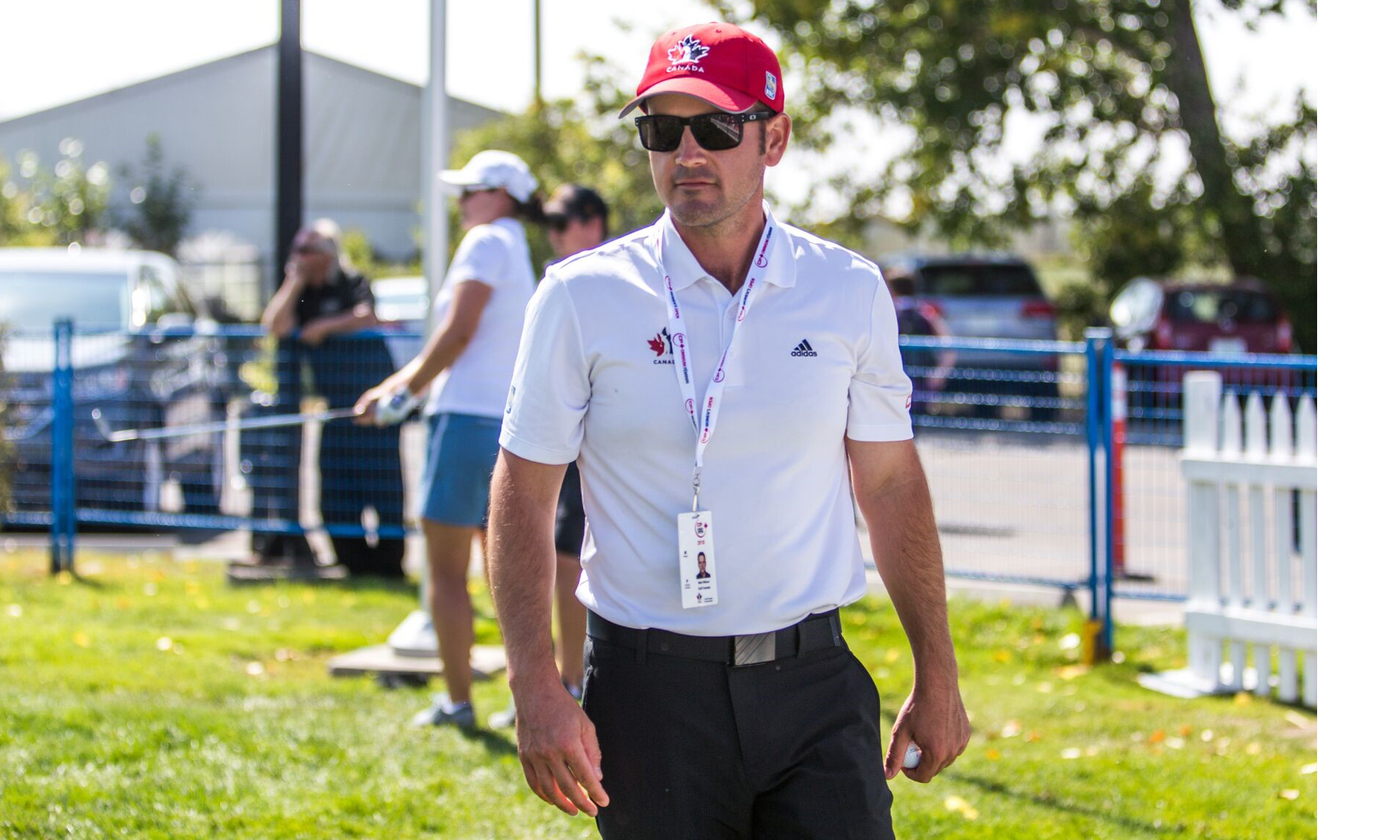 He is the recipient of numerous teaching and coaching recognition awards, most recently being named by Golf Digest as one of the Best Young Teachers in America and by US Kids Golf as a Top-50 Kids Teacher (2014 & 2015; honorable mention in 2011 & 2012).

As an accomplished golf coach, Wilson has an established track record of successfully elevating the performance of developing competitors as well as facilitating personal-best performances at the Junior, NCAA, Amateur, and Professional levels.